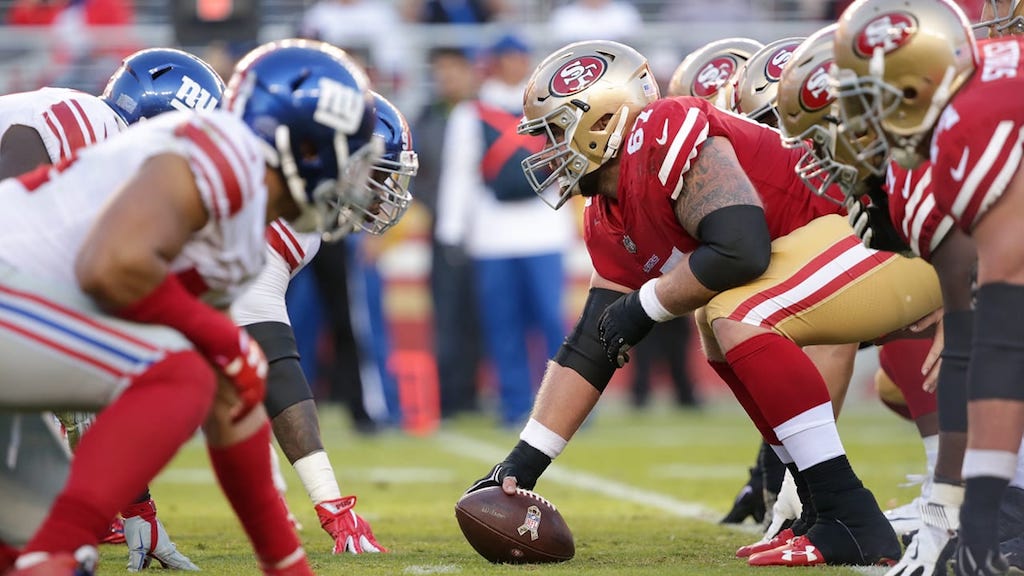 On balance, it was not a good week for the San Francisco 49ers. Yes, they won their game against the New York Jets – handily, we might add. But for a team looking to repeat as NFC champions, the outlook is bleaker than it was before. But this week, we have some tips for Niners Giants betting.

BetAnySports patrons also know that the New York Giants suffered a crushing blow as well. These wounded teams meet up on Sunday at MetLife Stadium at 1 PM ET. The game is televised on a regional basis by Fox, and NFL bettors can get better odds with reduced juice and place wagers on the outcome in real time with Sports Betting Prime.

San Francisco won a 31-13 decision over the Jets, exposing Sam Darnold’s stunted development along the way. But here’s the REAL scorecard – by game’s end, they had lost a lot of players.

Defensive linemen Solomon Thomas and Nick Bosa are out for the year with ACL injuries. Running backs Raheem Mostert and Tevin Coleman have knee injuries and won’t play this week. Jimmy Garoppolo has a high ankle sprain, and it would be surprising if he played.

Also consider that defensive end Dee Ford is also likely out, and corner Richard Sherman is on injured reserve, as is wide receiver Deebo Samuel (foot).

That’s a lot of guys out of action.

The good news is that George Kittle is available to play, after sitting out with a knee injury.

The additional bad news is that these guys may be scared of MetLife Stadium. We’re not kidding. Will this impact Niners Giants betting?

There has been new turf installed at the ballpark in the Meadowlands, and coach Kyle Shanahan blames the recent injuries squarely on that. He remarked that it was “sticky” and that it caused more ankle and knee problems than he’s seen from anything else. And he laments having to go back.

But he has to go – he’s got no choice. What I’m wondering is how he’s going to treat this as far as exposing front line players to it, and for how long. That would include Kittle, an All-Pro tight end.

In the NFL betting odds for Niners Giants betting that have been posted on this game by our friends at BetAnySports, the Niners are favorites on the road:

The 49ers are in a weird scheduling situation where they are playing road games at the same stadium in back-to-back weeks. You’d think they would stay around the New York area, but instead they went to West Virginia between games.

Meanwhile, Giants coach Joe Judge says that he has held numerous practices and walk-throughs on the new surface, and “not a single player said anything negative to me along the way at all about any of the facilities and, specifically, the turf,’ as he told reporters.

Hey, don’t bother the Giants. They have injury problems of their own. Saquon Barkley suffered a torn ACL at Soldier Field and is out for the year. The team got caught short at running back, turning to Dion Lewis, who is primarily a third down back. Wayne Gallman will probably step in. Wide receiver Sterling Shepard got turf toe in Chicago and may not be able to play.

Daniel Jones suffered through an interception and a strip sack last week against the Bears, bringing his total to 27 turnovers in 14 games. But he also led a pretty spirited effort as the Giants, down 17-0 at the half and without Barkley, came back and had a chance to win at the end, only to be killed by an offensive pass interference call on Golden Tate. They did hold the Bears scoreless in the second half.

So that brings us to our free sports pick. We know the 49ers like to run the ball as a top priority, and with a rotation, but now they have only one reliable guy (Jerick McKinnon) to do it with. Our assumption is that Nick Mullens will be the quarterback, and he is without a couple of running backs, Deebo Samuel and perhaps Kittle.

San Francisco does not have Bosa, Thomas or Ford to put the pressure on Jones. They may have a lot of other people sore after last week’s game. This turf is in their head. The Giants (they say) are not bothered in the least by it.

Maybe this isn’t such a bad situation for the home dog GIANTS.

Check out BetAnySports for plenty of game props and player props for Thursday night NFL action……. Also keep in mind that reduced juice is in effect, so you’ll get better numbers……. Make your deposits any way you want; through a debit or credit card, person-to-person transfers or the virtual currency of Bitcoin, which is fast and easy with their automated system, and NEVER incurs a transaction fee!